I am a full-time researcher at Inria Rennes within the CAPSULE team. I work in cryptology, with a focus on symmetric cryptanalysis, quantum algorithms and post-quantum cryptography.

Previously I was a postdoctoral researcher at the CWI in Amsterdam, in the Cryptology Group where I worked with Marc Stevens. I completed my PhD thesis in 2021 in Inria Paris, in the team SECRET (now COSMIQ). My thesis advisor was María Naya-Plasencia and my co-advisor André Chailloux.

Post-quantum cryptography aims at protecting current cryptosystems from an attacker equipped with a large-scale quantum computing device. While such a machine does not exist yet, it is well known that it would be able to break some widely used public-key cryptosystems (for example RSA). This is why the community is designing post-quantum cryptosystems which would be immune to this threat.

I am primarily interested in the security of secret-key cryptosystems ("symmetric"), such as block ciphers, hash functions, MACs, etc. In the "classical" world, this security is ensured by a constant cryptanalysis effort. In the "quantum" world, it is commonly admitted that these algorithms are generally robust, due to a lack of algebraic structure. However, this is just a general belief. The purpose of "quantum symmetric cryptanalysis", a very recent line of work, is to formalize the post-quantum security of symmetric designs in the same way as in the classical world, in order to offer the same security guarantees. This is the context of most of my work.

I have also worked on some applications of quantum algorithms in public-key cryptography. 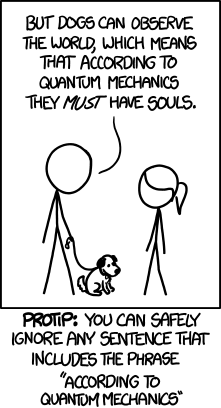 By Randall Munroe on xkcd.com